I'm thrilled to be doing my first ever author interview with the one and only Charlie Cochet!

S: Hi Charlie! Thanks for stopping by today!

C: Thank you so much for having me! It’s great to be here.

S: I’m a huge fan of your books! I always jump on your new releases. Do you have a personal favourite out of them all?

C: That’s a real tough one. I love each story for different reasons. One of my favorites is the THIRDS series because I’m just having so much fun with it.

S: Beware of Geeks Bearing Gifts is one of your books that really made me smile. Do you have plans to write a sequel? Will we see Quinn and Spencer again?

C: I certainly have plans to write another story, one with Javier and Miguel, so we’ll certainly be seeing more of Spence and Quinn since Miguel is Quinn’s cousin.

S: I love the playlists you have for your books. Do you actually write while listening to music or do you prefer total silence?

C: I love music, and it plays a big part in my writing. Depending on the book is the music I listen to. Certain books have playlists, so I tend to listen to those songs while writing. The music always fits what I’m writing, the mood, and feel of it.

S: Where do you get the inspiration for your books?

C: Everywhere. I’ve written plenty of scenes that were influences by real life events. Some of Dex’s hijinks or childhood stories that he tells were drawn from real life experiences.

S: I’ve loved so many of your couples! Do you have a favourite couple that you’ve written?

S: What’s your favourite genre to write in? Is there a genre you would like to write that you haven’t had the chance to yet?

C: Paranormal and Urban Fantasy are my favorite to write in. I just love world building. The possibilities are endless. I’ve written a little bit of everything, but I’d love to write some historical paranormal.

S: THIRDS has to be my favourite series of all time. I love the bones of those characters and the books! They all have a special place in my heart. How did that series come about?

C: That series came about after I decided I wanted to write a multi-book Paranormal series with shifters, but a little different to what was out there. So I started asking myself “what-if” questions which eventually lead to the world-building of the THIRDS.

S: Did you always know it would be a series? If yes, did you know other couples would get their own books?

C: I did know it was going to be a series. I figured there would be other couples by the time I finished writing the first book. I wasn’t surprised because that happens to me more often than not. I was surprised by Ash most, and the way he developed into his own kind of hero, demanding his own book. Once he interacted with Cael, there was no stopping him.

S: How many books can we expect in the series/universe? Any chance you’ll add more as you write the books?  Do you have a plan for how this series is going to end or will you find that out as you go along, like us readers?

C: The initial series is 9 books. It was 8, with Seb and Hudson’s book being 7.5, but it didn’t make sense that way considering their book follows the timeline, just like Ash and Cael’s, and Calvin and Ethan’s, so we changed Seb and Hudson’s book to 8. Then we have a couple of side stories with Austen and Zach, and Lou and Bradley, but there’s also some exciting news coming soon. Readers will get a clue by the end of Smoke & Mirrors, book 7 of what’s to come, but I’m not done with Dex and Sloane quite yet. ;)

S: What scene in the series was your favourite to write?

C: There were really so many. Really anything that involved Dex’s shenanigans was always so much fun to write. The scene in Sloane’s bedroom where Ash catches them by surprise and Dex is hiding in the closet is one of my favorites, as well as the training scene in Blood & Thunder.

S: What was the hardest scene to write?

C: The hardest scenes have been in Smoke & Mirrors because they were the most emotional for me. This books deals a lot with Dex facing his past and the death of his parents. He’s trying to put on a brave face, but he’s going through so much that it’s just heart-breaking.

S: The ending of Catch a Tiger by the Tail left me desperate for more. I literally screamed. What can we expect from Smoke & Mirrors? Will we need a lot of tissues and or alcohol/chocolate while reading them?

C: Well, I shed quite a few tears while writing it, so that might be the case for readers. Dex is this goofy, cheerful guy, and Smoke & Mirrors is just an emotional roller coaster for him, yet he’s trying so hard to keep it together.

S: Something I know people are dying to know. Will Dex and Sloane ever adopt a puppy/dog?

C: LOL. I don’t know. Maybe. But not for a while. These two have a lot coming their way which won’t allow much puppy time. I know Dex would love a dog, but their lives are set to get a whole lot more complicated.

S: Apart from more THIRDS, what books have you got coming out? Anything you’re particularly excited about?

C: Aside the new THIRDS stuff—which I’m very excited about, I have my Dreamspun Desires story: Forgive and Forget, coming out April 1st which I’m very excited about. I grew up reading category romances and Harlequin books, so getting to write a category romance was so much fun! Forgive is an amnesia story with a sweet, somewhat awkward pie shop owner and a handsome, and dangerous mystery man. Then in May, Lovie in Retrograde, my first purely science fiction romance is out. It’s a fun and sweet novella set in the future with American intern Kelly Sutton working for the Photonic Royal Society in New London.

S: Thanks again for stopping by! I’ve loved having you. Really looking forward to your releases this year!

C: Thank you so much for having me! It was such a pleasure! 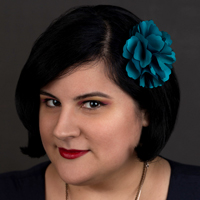 Charlie Cochet is an author by day and artist by night. Always quick to succumb to the whispers of her wayward muse, no star is out of reach when following her passion. From Historical to Fantasy, Contemporary to Science Fiction, there’s bound to be plenty of mischief for her heroes to find themselves in, and plenty of romance, too!

Currently residing in South Florida, Charlie looks forward to migrating to a land where the weather includes seasons other than hot, hotter, and boy, it’s hot! When she isn’t writing, she can usually be found reading, drawing, or watching movies. She runs on coffee, thrives on music, and loves to hear from readers.