Rating: 5/5
This series is an addiction for me. I find myself diving in and gobbling up as much as I can and then desperately waiting for more and more. Thankfully, I got to read the first few one after the other, which helped a lot!

Rack & Ruin featured less Dex and Sloane drama, apart from one thing that happened in the latter half of the book that left me wondering where would they go from there. But it wasn't OTT and it was desperately needed. I hate it when established couples I love break up, so I was glad this didn't happen with them.

We see a lot of the other two future couples. Cael and Ash and Calvin and Hobbs. There is some drama with them and it makes me even more eager for their books.

The stuff with Ash had me worrying a bit... or maybe more than a bit. I'll admit, I kind of knew things weren't the way they appeared to be, but that didn't help me feel any better. All I could think about is what damage it would do to his relationship with Cael. Poor Cael really is head over heels in love with him.

The ending is cruel in so many ways. I might have jumped off the settee when I finished. I trust Charlie Cochet, though, and I know she'll make the next book worth the pain of the ending. 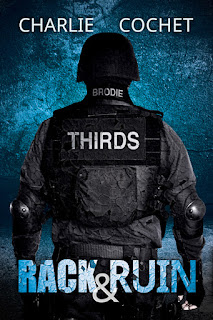 New York City’s streets are more dangerous than ever with the leaderless Order of Adrasteia and the Ikelos Coalition, a newly emerged Therian group, at war. Innocent civilians are caught in the crossfire and although the THIRDS round up more and more members of the Order in the hopes of keeping the volatile group from reorganizing, the members of the Coalition continue to escape and wreak havoc in the name of vigilante justice.

Worse yet, someone inside the THIRDS has been feeding the Coalition information. It’s up to Destructive Delta to draw out the mole and put an end to the war before anyone else gets hurt. But to get the job done, the team will have to work through the aftereffects of the Therian Youth Center bombing. A skirmish with Coalition members leads Agent Dexter J. Daley to a shocking discovery and suddenly it becomes clear that the random violence isn’t so random. There’s more going on than Dex and Sloane originally believed, and their fiery partnership is put to the test. As the case takes an explosive turn, Dex and Sloane are in danger of losing more than their relationship.